Bo’s Bumpy Battle: Why Your Pet Needs Each Lump and Bump Checked

Finding a lump or bump under your pet’s thick fur can be a heartstopping moment, as your mind immediately goes to thoughts of cancer. While not all lumps are malignant, each bump that pops up on your pet should be evaluated. Your furry pal may have had previous masses checked, but new growths can be a completely different type, or old growths may change from benign to malignant. Learn how one dog’s story could have ended differently, if his family had waited before our LaGrange Veterinary Hospital team evaluated his lumps.

Bo was a typical black Labrador retriever—kind-hearted, chubby, and always up for a fun activity. As Bo grew older, he began to slow down, and spent more time in his cozy orthopedic bed than exploring the trails surrounding his home. With the reduction in exercise, Bo grew more chunky. While his family thought Bo’s extra weight was cute, his pudginess was detrimental to his joint, heart, and total-body health.

One day, during Bo’s regular massage, his owner discovered a new roll, only to realize it was actually a lump situated behind his front leg. Unsure whether the lump was truly a mass, or an odd fat roll, Bo’s owner checked the same spot behind the other front leg, and found no bump. Worried what such a lump could mean for Bo’s health, his owner scheduled an appointment with our Dr. Breite for evaluation.

At Bo’s appointment, Dr. Breite performed a full physical exam, and ran his hands along Bo’s body to search for additional lumps. Everything checked out fine, except for the one mass behind his front leg. Although Bo fit the stereotype for a certain type of mass common in older, overweight Labs, Dr. Breite didn’t take any chances, and took a sample of Bo’s lump with a small needle and syringe.

After Dr. Breite examined the sample under the microscope, his suspicions were confirmed—Bo had developed a lipoma behind his front leg. Lipomas are fatty growths that usually do not cause an issue for pets, since they are benign masses, although they can restrict a pet’s range of motion if they grow in a tricky spot, such as behind a front leg. Since Bo’s lipoma was in such a spot, we scheduled surgical removal before it restricted Bo’s activity, or became too large to remove easily.

Bo recovered well from his lipoma-removal surgery, and spent the next several years maintaining his chubby physique, wearing out doggy beds on a regular basis. Occasionally Bo would visit us again for another lump check-up, as more bumps popped up along his sides. Since all these masses were diagnosed as lipomas, and grew no bigger than a quarter, we simply monitored them for change, rather than putting Bo under anesthesia for tiny masses that were not restricting his daily activities.

Then, earlier this year, we noticed Bo was scheduled for another mass evaluation. During his examination, we began to worry that his new lump was not a lipoma—this mass, on his front leg, was hard, and painful to the touch. In fact, Bo was reluctant to put weight on the affected limb, and had been refusing to eat his normal meals, which was incredibly unusual for him.

Concerned about the potential for a malignant growth, we took X-rays of Bo’s leg, focusing on the mass. The X-rays told a sad tale—Bo had developed osteosarcoma, a bone cancer that affects the long bones in pets, is incredibly painful as the cancer eats away at the bone, and is prone to metastasizing to vital organs, such as the lungs. Fortunately, Bo’s survey X-rays, and an ultrasound of his chest and abdomen, showed no metastasis signs.

Bo’s best treatment option was front-leg amputation, to remove the cancerous mass, and prevent it from spreading. Recovery would be difficult, since Bo was overweight, but this was his best chance for a long, comfortable life.

We immediately scheduled Bo for his amputation surgery, which he came through uneventfully, and we kept him happy and comfortable with multimodal pain management. We emphasized the importance of weight loss for Bo’s continued health and comfort, as his remaining limbs would be taking on an extra burden. His family understood, and, reluctant to heave around a 125-pound Labrador, they implemented his diet plan as soon as he returned home.

Bo recovered well from surgery, and learned to cope with a missing leg without any troubles. At his next wellness visit, we were pleased to see a remarkable weight loss, and his body condition score had reached an acceptable number. No new lumps had popped up, and his family checked daily with a full-body massage. Delighted with Bo’s success story, we looked forward to caring for him for the rest of his days.

Why your pet’s lump should be evaluated immediately 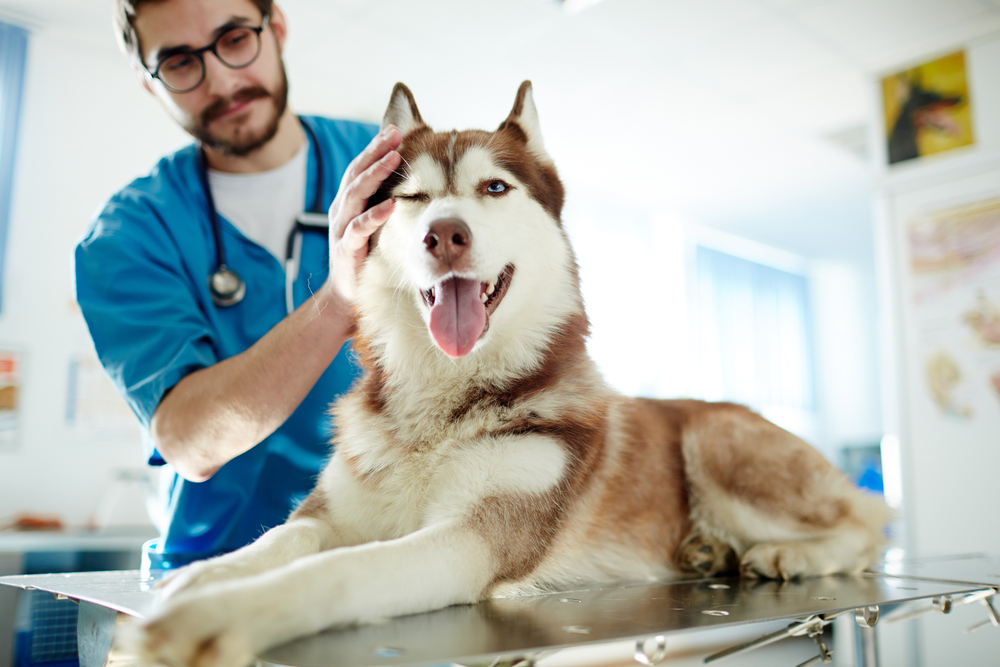 Dr. Breite at LaGrange Veterinary Hospital agrees that pet owners should not adopt the wait-and-watch method when it comes to their furry pal’s lumps and bumps. If Bo’s family had waited to schedule an appointment after noticing the mass on his leg, the cancerous tumor could have metastasized to his lungs, liver, or spleen, and left him with a much less favorable outcome. As soon as you notice an abnormal growth on your pet, or if a previous mass begins to change in any way, schedule an appointment with our team. We will carefully evaluate the mass’ features, and check for cancerous cells. If the mass needs to be removed, we recommend complete surgical excision as soon as possible, since removing the mass when it’s small is much easier. Also, we take healthy margins around the suspicious area, to ensure we remove every abnormal cell, which also makes a small mass easier for Dr. Breite to excise. A tumor that grows too large, in an area without much spare skin (e.g.,on a limb), can make closing the incision site after the mass’ removal problematic, and can cause a difficult recovery. In addition to a simpler surgery, early mass removal reduces the risk for potential metastasis to the lungs, liver, or spleen, keeping your pet healthier and, hopefully, cancer-free after surgery.

Have you noticed an abnormal bump pop up under your pet’s fur? Call us to schedule an appointment for a thorough evaluation.

About the Author: LaGrange Veterinary Hospital

Our current COVID-19 protocol permits one vaccinated, masked person to accompany the pet into the hospital. When you get here, please call from the parking lot to let us know you are here. We will follow up with a few questions and further instructions on whether or how you may enter with your pet. For clients who arrive with children or dependent adults, our lobby is not an appropriate place for them to wait during your pet’s visit.
When you enter our hospital, please make sure you are wearing a well-fitting mask that covers your mouth and your nose. You will be required to wear your mask over your mouth and nose for the entirety of your time in the hospital.
For unvaccinated clients, clients who arrive with children or dependent adults, or clients who prefer not to wear a mask, our curbside protocol remains in effect: a member of our staff will meet you outside to bring your pet in while you wait outside. Once he is done with his exam, Dr. Breite will call you on your cell phone to discuss exam findings, recommendations, results and next steps as well as answer any questions you may have, and your pet will be returned to you. All dogs must be leashed and all cats must be in a carrier.
For prescription diet and medication needs, we ask that clients call ahead to make your request so that we can get your product ready and take payment over the phone. Then, when you arrive to collect it, call from the parking lot to let us know you are here. We will leave your food or medication for you outside the exit door for you to pick up. You may also order your pet’s medication and food for home delivery through our online pharmacy.If you have any questions regarding your pet’s health please call us at 845-473-9121.